We're open and available for you to make an appointment.

Ptosis (pronounced toe–sys) is a droopy upper eyelid. The upper lid is lifted up by the levator muscle, which is attached to the lid by a tendon called the aponeurosis. 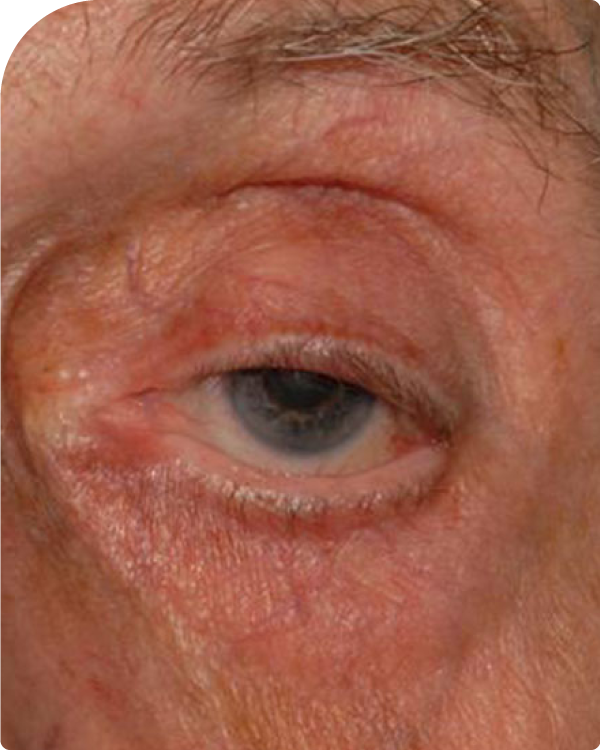 The commonest cause for ptosis in adults is gradual, age-related stretching of the aponeurosis tendon known as involutional ptosis. The levator muscle itself is not affected and so the movement of the eyelid from looking up to down remains normal. Long term contact lens wear can cause ptosis, perhaps because repeated insertion and removal of the lens causes stretching of the tissues. Sometimes ptosis follows other eye surgery or an injury. The lid may droop due a problem in the nerve supply to the levator muscle Congenital ptosis (present since birth) is usually due to a poorly developed levator muscle

What are the effects of ptosis?

The upper lid droops. There may be difficulty with seeing, or discomfort and headache, especially towards the end of the day. The brow may be raised in an effort to keep the lid lifted or the head may be tipped back in order to see under the droopy lid(s). One or both lids may be affected.

What is the treatment for ptosis?

Mild ptosis may not require treatment.

If more severe, surgery may be very helpful. The surgeon needs to check that the eyes are generally healthy since ptosis surgery may not be advisable in some eye diseases. There are several operations used to treat ptosis.

The operation is performed through an incision in the natural skin crease of the eyelid. The aponeurosis tendon is tightened with stitches and the wound closed. The results of surgery are better when it is performed under local anaesthetic because when you are awake during the operation you can open your eyes when asked to allow the surgeon to judge the best position for your eyelids. Generally all the stitches are absorbable and will drop out by themselves after several weeks.

This operation is used when the levator function is not normal particularly in children with congenital ptosis and a fairly inactive levator muscle. The levator muscle is tightened with stitches in a similar way to the tendon tightening in aponeurosis advancement

This operation is performed through an incision on the inside of the eyelid. A layer of muscle called Muller’s muscle is shortened and tightened using 3 stitches, which need to be removed up to 3 weeks following surgery. This operation is generally only performed on patients who have shown a positive response to an eye drop test performed in clinic.

This operation is very occasionally used to correct small amounts of ptosis and is performed through an incision on the inside of the eyelid.

This operation is used to correct ptosis when the levator muscle is very weak. The forehead muscle (frontalis) is used to help lift the eyelid by placing a sling of material between the forehead and the eyelid. The material can either be taken from the patient eg. the tendon in the outer thigh, or a synthetic material can be used such as silicone cord.

What are the aims of surgery?

The surgery aims to lift the eyelid enough to stop the ptosis causing problems with vision. T

The ideal result is when:

Thank you! Your submission has been received!
Oops! Something went wrong while submitting the form.